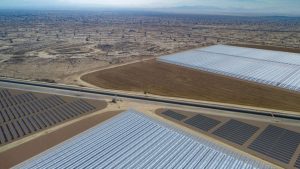 The 770-acre Belridge Solar Project, scheduled to break ground in 2019, would be adjacent to Aera’s oilfields about 35 miles west of Bakersfield’s outskirts. It would produce 850 megawatts of energy annually — more than any other solar field in the state, according to GlassPoint’s acting CEO, Ben Bierman, whose company will spearhead the project.

Some of that energy would generate power for day-to-day operations, but the majority would be used in place of natural gas in a process called thermal enhanced oil recovery. That process, which involves steam injection, brings thick, heavy crude oil more easily flow to the surface in older wells.

Oil companies at one time abandoned such wells, but that changed in the 1960s, when producers began heating water with natural gas to create steam and injecting it into the ground. The process, pioneered in Kern County, will become greener once the Belridge Solar Project is complete, company officials said.

The result of the switch to emissions-free steam? A reduction in carbon dioxide emissions by more than 376,000 tons. That’s equal to the emissions of 80,000 cars per year, roughly 38 percent of all the cars in Bakersfield, according to Aera officials.

“Today signifies the beginning of a partnership that will change the way Aera Energy produces oil in one of the largest oilfields in the country,” Aera Energy CEO Christina Sistrunk said, describing it as an “environmentally important day” for all of the San Joaquin Valley.

Others from Aera and GlassPoint, along with local legislators, described the project Wednesday as “historic” and “pioneering.”

“This is the future,” said Assemblyman Rudy Salas, D-Bakersfield.

Aera’s move toward solar wan’t completely unexpected. Companies have attempted to harness solar for industrial use before; Chevron previously piloted the use of more than 7,600 mirrors in Coalinga to harness the sun’s energy for oil extraction. A Chevron spokesperson in 2015 told Natural Gas Intelligence, an industry trade publication, that the economics of the technology were “not attractive” when compared to natural gas, a lesson Chevron learned after giving the technology a try for four years.

Chevron spokeswoman Abby Auffant said Tuesday that the company has no immediate plans to launch solar technology in San Joaquin Valley oilfields, but that it’s continuously looking for opportunities to do so worldwide.

Steam production is a big part of Aera’s operating costs, Sistrunk said. The solar alternative is cost competitive, she said, and reduces the carbon footprint of the operation.

“Belridge Solar is more than just about using solar energy to improve our operations,” Sistrunk said. “This project speaks to Aera’s ongoing commitment to lead the oil industry into a lower-carbon future.”

GlassPoint’s technology uses thin, curved mirrors inside a greenhouse to track the sun and focus heat on pipes containing oilfield water. It was developed in Kern County and piloted in 2011 at Berry Petroleum in McKittrick’s century-old oilfields.

Since then, the company has taken its operations overseas, having struck a deal in Oman, an oil producing Middle East nation south of Saudi Arabia. GlassPoint piloted a seven megawatt project there for Petroleum Development Oman, the nation’s top producer, and is now developing Miraah, which will be one of the world’s largest solar plants when completed.

“We’re really excited to be bringing this technology back to where it was born, in Kern County, here in California,” Bierman said.

The construction of the Belridge Project, Bierman said, would create more than 500 jobs. 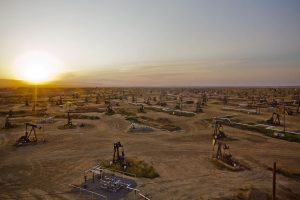 Harold Pierce covers education and health for The Californian. He can be reached at 661-395-7404. Follow him on Twitter @RoldyPierce

« Shale RFQ: Questions people have about fracking and leases or mineral rights
7 Canadian oil and gas plays to watch in 2018: Peters & Co. »