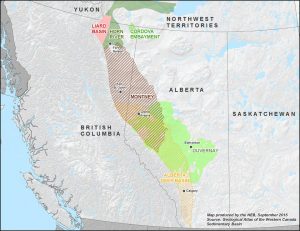 Oil and gas resources in the United States are proving to be tough competition for Canadian assets looking for investment dollars, but some plays north of the border have economics that stack up just fine, according to analysts with Peters & Co.

A number of Canadian plays even have lower well costs, lower royalties and/or access to the oilsands, a premium market for the condensate produced in many liquids-rich wells, the investment firm noted in a research note this week.

“However, the scale of a number of these Canadian plays can be small relative to the U.S. counterparts, and the top quartile and high-graded inventory which tends to attract much of the investment in these U.S. plays continue to rank very well…We observe very strong economics for some of the top quartile results in plays like the Permian and Eagle Ford, however, average results still drive corporate profitability and corporate free cash flow yield which is where the average Canadian plays rank as competitive with U.S. averages.”

Here are seven key Canadian plays to watch in 2018, according to Peters & Co.:

There has been a substantial amount of Crown land sales in the lower southwest edge of the Athabasca oilsands region since mid-2016, analysts noted.

The Marten Hills region, located about 200 kilometres north of Edmonton, is a target for conventional heavy oil with “enough consolidation/rock integrity to be well suited for multi-lateral, open hole and un-stimulated completion” (no fracking).

There is currently about 2,000 bbls/d coming from multi-lateral wells in the Clearwater Formation, owned by companies including Spur, Deltastream and Cenovus Energy. Peters & Co. also noted that Canadian Natural Resources has applied for its own multi-well pad on the south end of the trend.

“The Alberta Deep Basin continues to host some of the most prolific gas wells in Western Canada,” analysts wrote, with the average initial production rate of the top 30 wells at 15 million cubic feet per day.

Tourmaline Oil, Bellatrix Petroleum and Peyto Exploration operate some of the top performers.

“In addition to the prolific gas production in the Deep Basin, there are also several liquids plays being exploited throughout the fairway” including horizontal oil wells, Peters & Co. said.

Another hot spot for recent Crown land sales, production has grown from the Duvernay East Shale Basin surrounding Red Deer, Alta. from virtually nil to about 4,800 bbls/d in under two years, analysts said.

“With the majority of the Crown lands sold as two-year term petroleum and natural gas licenses, we expect activity to continue its upward momentum into 2018 as producers delineate their lands to continue mineral rights and eventually move into multi-well pad drilling as Vesta and Artis have done.”

The B.C. side of the Montney play currently accounts for more than 60 percent of its total production, according to Peters & Co.

“Condensate production in B.C. has doubled over the last two years solely due to Montney development, where the province currently produces about 48,000 bbls/d of condensate (plant and wellhead combined) which is ~95 percent from the Montney.”

The list of producers targeting the B.C. Montney is long, including ARC Resources, Chinook, Crew, Encana, Tourmaline, ConocoPhillips and Shell.

Light oil production is on an upswing from the Charlie Lake Formation and Lower Montney Turbidite near Progress in west central Alberta, Peters & Co. noted.

“Total oil production from horizontal Charlie Lake wells in the area averaged ~5,500 bbls/d from January 2015 through May 2017 and has doubled to ~10,500 bbls/d in September 2017, mainly due to recent drilling by Tourmaline, the largest Charlie Lake operator in the area.”

The Viking light oil play in Alberta and Saskatchewan continues to grow, driven by top operators Raging River Exploration and Teine Energy, with play production averaging about 81,000 bbls/d in October 2017 – an increase of about 51 percent compared to October 2016.

“The Viking play continues to rank amongst the strongest economics in North America, particularly as well costs have continued to decrease over the past few years,” Peters & Co. said.