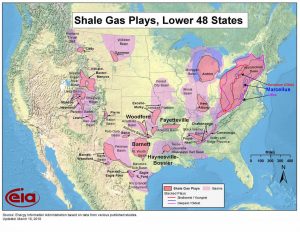 Fracking is a slang term for hydraulic fracturing. Fracturing is a process by which highly pressurized fluid is pumped thousands of feet into the ground to fracture rock formations. The goal is to release the natural gas that’s locked inside the rock.

What most concerns people about fracturing is ground water contamination. The worry is that fractures underground, caused by the process, will extend upwards and into aquifers, releasing gas and chemicals into the ground water supply. There’s been no confirmed reports of such a thing happening, though surface spills and drill site blowouts can lead to localized environmental concerns.

Will my water catch on fire?

Flammable water is caused by the release of methane gas into a drinking water supply. Methane gas occurs naturally and can be released by any kind of drilling, including water wells. In Pennsylvania officials fined Chesapeake Energy $1 million for contaminating ground water with methane. It was determined that the company had not properly cemented it’s boreholes and gas migrated up the well, between rock and into aquifers.

How often do royalty payments come?

Depending on the company, royalty payments can arrive monthly or quarterly.

Are my royalty payments transferable?

Yes. If you plan on selling your property, notify the gas company that is leasing your land and your realtor. They will make arrangements to allow the royalty payments to transfer to a different land owner.

Royalties are payments from the gas company to the landowner as part of a lease agreement. Royalties payments cannot begin until production begins. The payments are dependent upon the market price of the resource.

Will I get free natural gas if I allow drilling on my property?

However, if it is shale gas, you can’t hook right up to it. It must be processed first. The BTUs produced from the shale gas in Ohio and Pennsylvania are too high to be used directly in homes or even in grain dryers.

What are mineral rights?

Will the fracking contaminate my well water?

While there are no guarantees as to what can and can’t happen. The fracking process runs thousands of feet below freshwater aquifers.

I have a well, should I allow fracking on my property?

The answer to this question, depends on the circumstances surrounding the property and the landowners. Before making a decision, contact an attorney and do research on the process, what it involves, the company’s environmental record and who will be impacted.

There’s somebody at my door asking about my land, what should I do?

The first thing any landowners should do is consult an attorney. The attorney can help negotiate with the company on a future lease or mineral sale.

How deep in the ground do companies frack?

A shale gas well runs 5,000-8,000 feet below the surface, according to the Ohio Department of Natural Resources. By the way, that is equal to more than 1.5 miles and thousands of feet below freshwater aquifers.

What’s the difference between fracking and deep injection wells?

According to the Ohio Department of Natural Resources, fracking is the process to retrieve the gas out of the ground. A deep injection well is used to inject brine water into the ground for disposal, as a result of the exploration for natural gas.

When I lease my land, will the company put a deep injection well on it?

The disposal arrangement depends on the agreement worked out in the lease between the landowner and the gas company.

I have livestock, is it safe for them to be around the drill site?

According to Penn State Marcellus Center for Outreach and Research, there are many farms still producing livestock along side the drilling process.

How long do leases typically last?

The length of the leases vary by driller and the terms negotiated by the landowner and the gas company. According to sample leases on the Penn State Extension website and Homeland Energy Ventures, they can range from five years to 10 years before expiring. However, if drilling work begins (the definition of drilling work also depends on what is written in the lease) the lease can run continuously.

How long will I get royalty checks?

Royalty checks will be issued as long as the well is producing. According to Chesapeake Energy, landowners leased with them can expect to receive royalties within 120 days of the first sale of gas. It is paid two months in arrears.

Can I sell my mineral rights?

Yes, if it has been determined that you own the mineral rights then you can sell them.

Is there any long term impact on the environment?

There is no scientific proof about any long term impacts on the environment. Although fracking is not a new process, (it dates back to 1847), the drilling through the Marcellus and Utica shale layers in the earth is since drilling began in the early 2000’s.

Why are some states banning fracking?

The closest state to Ohio and Pennsylvania regarding strict fracking regulations is New York. There is no longer a moratorium on it but there is a friendly agreement that there will be none of that until more studies are concluded on the safety of fracking. There are concerns over groundwater and fracking in New York.

How much will the companies pay for my land?

The range of prices depends on when you lease your land and with what company. Only you can decide on the true value of a lease by shopping around and talking with oil and gas companies.

What is the average price per acre?

There is no real average price per acre on leasing. It depends on the lease, the company and when you sign the lease papers.

Does my lease transfer if I move from my property?

What kind of things can I expect to see around my home?

Drilling rigs, increased truck traffic, water testing companies and large pieces of equipment being moved along the roadways are all types of things residents can see in the neighborhood when a drilling site is chose.

What happens with wastewater?

According to the Penn State Marcellus Center for Outreach and Research, hydraulic fracturing is necessary for development of the Marcellus shale natural gas as this process opens up fractures in the shale which allow the natural gas to flow to the well. This operation involves injecting several million gallons of water, sand, and a small addition of chemical additives into the formation at high pressure. After the injection is completed, approximately 10-20 percent of the fluids (known as flowback) return to the surface via the well. Therefore, a 5-million gallon hydraulic fracture stimulation might return 500,000 to 1 million gallons of water. According to the Penn State Marcellus Center, the reuse of the flowback fluids by the drilling industry for subsequent hydraulic fracture treatments significantly reduces the volume of wastewater being generated by hydraulic fracturing. This water can be treated and blended with fresh water and reused, which is what many companies are now doing to minimize the amount of water that would otherwise be potentially discharged to streams or rivers once treated.

Currently, new Pennsylvania Department of Environmental Protection standards dictate that any flowback must be treated to have a total dissolved solids (TDS) concentration of 500 parts per million, which is consistent with Pennsylvania drinking water standards, and therefore won’t increase TDS levels to unacceptable levels. There are new treatment plants being built to meet these standards and at least one is now in operation in Williamsport, Pa.

What is Utica shale?

What is horizontal drilling?

Drillers will use a bit to go straight down and then go sideways in order to reach pieces of land that were once not able to be drilled. It also allows for bigger pools of land to be clumped together in a unit which makes drilling more economical for the company.

Horizontal drilling technologies have been heralded by many as the greatest advances since the conception of the rotary drilling bit. Horizontal drilling now accounts for 5 to 8 percent of active onshore wells in the U.S., and seems to be increasing every year. The ability of horizontal drilling to reach and extract petroleum from formations that are not accessible with vertical drilling has made it an invaluable technology.