The rise of the UK’s nascent shale industry is “overhyped” and 55 million years too late, according to new research of the UK’s geology.

A team of scientists has warned that the UK’s most promising shale gas reservoirs have been warped by tectonic shifts millions of years ago which could thwart efforts to tap the gas reserves trapped within layers of shale.

Professor John Underhill, a chief scientist at Heriot-Watt University, said the debate over whether or not to develop domestic gas sources could prove redundant because Britain’s shale layers are “unlikely” to be an economic source of gas.

“Both sides of the hydraulic fracturing debate assume that the geology is a ‘slam dunk’ and it will work if exploration drilling goes ahead… but the science shows that our country’s geology is simply unsuitable for shale oil and gas production. The implication that because fracking works in the US, it must also work here is wrong,” he said.

UK gas companies including Cuadrilla, IGas and Third Energy have already ploughed millions into developing sites which contain potentially huge reservoirs of natural gas. However, the research shows that these shale zones are fraught with geological quirks which could severely limit gas recovery.

The only question that has been addressed to date is how large the shale resource is in the UK. The inherent complexity of the sedimentary basins has not been fully appreciated or articulated and, as a result, the opportunity has been overhyped,” Prof Underhill said.

The report shows that the Weald Basin, where IGas plans to explore for shale, is not nearly as geologically certain as key shale areas in the US. It was left “deformed” by an arch-like tectonic fold defined by its steeply dipping chalk ridges that form the North and South Downs in south-east England, he said.

Meanwhile in the Bowland shale basin in Lancashire, where Cuadrilla is active, there was a separate period of geological deformation about 290 million years ago, he added.

Mark Lappin, Cuadrilla’s technical director, said the purpose of the company’s current drilling campaign is to “better understand the reserve, reduce speculation from all sides and decide if and how to develop it”.

“I expect Professor Underhill would be supportive of the effort to understand the resource including geological variation,” he added.

Ken Cronin, head of the UK’s onshore oil and gas association, added: “It is too early to make any firm predictions – but with imported gas predicted to rise to 80pc by 2035 it is important that we get on and complete this work.”

The findings are a blow to the Government’s bid to support a domestic onshore gas industry which could reduce the country’s reliance on imports from Qatar and Norway as North Sea flows dwindle. 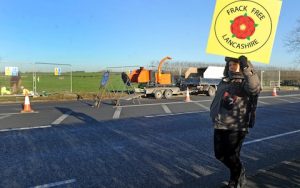