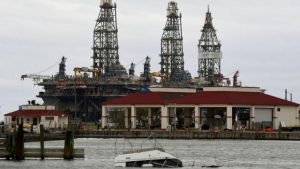 Harvey, the “500-year storm,” has destroyed homes across coastal Texas as far as 50 miles inland. The loss of life is not fully known, but growing. The nation’s attention has quite rightly been on the human dimension.

Just as the nation enters the Labor Day weekend, one of the heaviest travel times of the year, shortages — real and anticipated — are resulting in price spikes for gasoline. Prices at the pump tend to rise quickly, but drop slowly.

Several factors have combined to put pressure on production, refining and distribution.

As Harvey approached, offshore production was shut in as crews were moved to safety and managers took operational measures to avoid environmental damage.

The “glut” of oil in storage was being drawn down well before the storm, normally an indicator of price increases. This was facilitated by Congress when it lifted the ban on oil exports 20 months ago.

The concentration of refineries along the Gulf Coast makes the nation vulnerable to the superstorms we’ve had in recent years — Allison, Katrina, Ike and now Harvey. An estimated 25 percent of refining activity was halted to protect people, facilities and the environment. Some refineries in Texas are returning to operation while others in Louisiana could be at risk.

Add geopolitical risk from the crisis in Venezuela and the volatility grows. Many Gulf Coast refineries are configured to process heavy crude oil, which has low viscosity and high sulfur content. Venezuela is a major supplier of that grade.

American production has grown dramatically in recent years but much of America’s new production is light, “sweet” oil. Billions of dollars would be required to reconfigure these facilities.

Getting crude oil to refineries and product to market requires the availability of tens of thousands of miles of interdependent pipelines, some of which have been impacted.

Oil production increases are a function of the “rig count,” and that may flatten out as a result of the storm and its aftermath.

The supply chain of this industry is complex, and increasingly dependent on “just-in-time” availability of resources from crews to sand, water, chemicals, pipe and sophisticated equipment. The flooding of equipment and supply yards, as well as highways along the Gulf Coast, may interrupt the steady growth of oil production from the Permian Basin of West Texas to the Bakken fields of North Dakota.

A friend visiting North Dakota during the storm heard stories of how flooded equipment yards along the Gulf Coast were impacting operations 1,500 miles to the north. North Dakota counts on the summer months to get equipment into place to maintain operations.

The human dimension of the storm includes thousands of people in the oil and gas industry. When the media reports flooding in West Houston, they may be talking about the homes of staff at Shell, ConocoPhillips, BP, Halliburton and the hundreds of companies that support them. It will be challenging for them to get fully into gear after the Labor Day holiday.

The good news is that the energy industry has proved that it’s resilient. Challenges from technological changes to the price collapse have tested the mettle of the industry. The more nimble players have found and implemented solutions that seemed unimaginable a few years ago.

Bill Arnold is a professor in the practice of energy management at Rice University’s Jones Graduate School of Business. Previously, Arnold was Royal Dutch Shell’s Washington director of international government relations and senior counsel for the Middle East, Latin America and North Africa.