NRDC today released a new report titled “Leaking Profits: How the U.S. oil and gas industry can reduce pollution, conserve resources, and make money by preventing methane waste” that highlights the top 10 available technologies that can do just that.

In a nutshell, the report finds that: 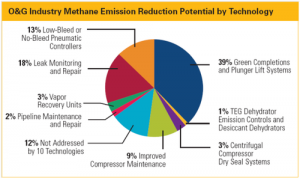 As I mentioned, these technologies are extremely profitable. There is typically an upfront cost associated with them, but the revenue generated from saved methane and any operational savings (less any costs) more than compensate – the investments are typically paid back in less than six months to three years. And profits continue after that.

Yet, industry has not adopted these technologies across the board. While some companies have voluntary adopted such technologies through the EPA’s Natural Gas STAR program, most have so far chosen to divert their capital toward more profitable ventures. But with such incredible public health and environmental benefits, EPA and the federal and state governments should make these 10 technologies a requirement.