Over the past year, five multinational energy companies have sold off nearly $25 billion worth of their Canadian assets to domestic companies.

When ConocoPhillips signed a $13.3 billion deal last month to shed many of its Canadian assets, it became the latest in a growing list of foreign firms to sell tar sands holdings to a Canadian company.

A series of recent deals have signaled that multinational energy giants are diverting their money to cheaper and less-polluting resources. But while the message about their investment priorities is clear, the implications for future tar sands production—and climate change—are less so.

All told, five American and European companies have sold nearly $25 billion worth of Canadian oil and gas projects over the past 12 months, the vast majority of them in the tar sands. This week, Reuters reported that Chevron is exploring a sale of its major oil sands stake.

Tar sands projects are among the most expensive sources of oil, and the extraction produces more greenhouse gas emissions than most conventional drilling. With oil prices remaining low, multinationals are shifting investment to higher-return projects like shale in the United States. When Marathon Oil announced the sale of its tar sands projects for $2.5 billion in March, for example, it also highlighted a $1.1 billion purchase in the Permian Basin of New Mexico and Texas. While economics is the leading factor in the sales, some advocates argue that climate change is playing a role, too.

Energy companies—European ones in particular—are facing increasing pressure to lower their carbon footprints, and are doing so by shifting away from heavier fuels like the tar sands and toward more natural gas and renewables. Just as Shell announced the sale of nearly all of its tar sands operations last month, for example, it also disclosed details of a new policy to tie executive bonuses to emissions reductions. Days after it sold its oil sands assets in December, Norway’s Statoil announced a $42.5 million winning bid to lease acreage for a wind farm off the coast of New York. This year, the company presented a “climate roadmap” in which it outlined a path to lower emissions and declared that “oil sands and extra heavy oil will not have a place in our future strategy.”

With the completion of the five recent sales, about two-thirds of oil sands production will be concentrated in the hands of Canadian companies, according to data compiled by JWN Energy. (JWN’s analysis cites a higher figure, but includes production by Imperial Oil, a Canadian company in which ExxonMobil holds a controlling interest.) That means investment likely will shrink, said Jennifer Winter, an energy economist at the University of Calgary’s School of Public Policy.

“If there are fewer investors in the oil sands, or there’s more concentration with the exit of these multinationals, it means that unless the companies operating in the oil sands are able to attract significant amounts of outside capital, it’s probably going to be slower growth than if Shell or ConocoPhillips stayed,” she said. “The oil sands are going to continue to be one of the marginal production areas for the near future.”

The long-term outlook is murkier. There are two factors that determine whether a project is profitable: the price of oil and production costs. While producers can’t control the global oil market, they can drive down costs, and by consolidating bigger projects in fewer hands, the Canadian companies may be able do just that, said Michael Dunn, an analyst with GMP FirstEnergy. “It’s their bread and butter,” Dunn said of the buyers of these projects, which include oil sands giants Suncor and Canadian Natural Resources Limited.

Several of the projects had been joint ventures between the buyers and sellers, which tended to duplicate roles. Having fewer companies in the game will also allow them to negotiate better prices with contractors and suppliers. And with the buyers focused primarily on oil sands, Dunn said, “some of these assets that the sellers were not committed to growing will be in the hands of entities that will be committed to long-term growth.”

There is one notable exception to the trend: ExxonMobil. The company has been a leader in exploiting the tar sands for half a century, largely through its Canadian affiliate Imperial Oil. Even before the sales, it pumped more oil from Alberta than any foreign company. And despite Exxon’s recent announcement that it had wiped off its books all 3.5 billion barrels of reserves at one of its tar sands projects—a move forced by financial reporting rules—the company has said it remains committed to the resource. That position is now looking increasingly isolated. 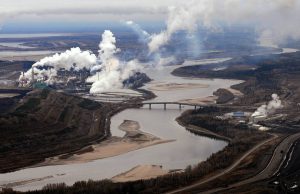