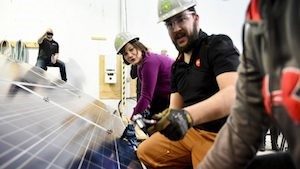 Alberta’s residential solar industry has chugged along for decades without government support.

That dry spell finally drew to a close on Monday, when the provincial NDP government announced a two-year, $36 million rebate program to help bring down the costs for residents, business and nonprofits who want to install solar projects.

By 2020, the number of solar installations on rooftops is expected to increase from 1,800 to 10,000 systems, which will create about 900 jobs and reduce greenhouse gas emissions by a half million tons (or the same as taking 100,000 cars off the road). The program is funded through the province’s carbon tax revenue.

“It’s the first time individuals and businesses across the province will have support to install solar and have the independence of being able to generate their own electricity,” said Sara Hastings-Simon, the director of the Pembina Institute’s clean economy program.

Rebate Program Will Pay 75 Cents Per Installed Watt, Up to 30 Percent of Cost

The 21-minute announcement was fairly short on details, with many of the specifics being worked out by the new Energy Efficiency Alberta agency. But the news is already being heralded as a “milestone” and “very significant” by solar advocates.

“Consumers are already excited about solar,” said David Kelly, CEO of SkyFire Energy, who was at Monday’s announcement. “There’s a lot of pent-up demand: people have been waiting for a program. And the industry is ready to deliver.”

In February 2016, the provincial government announced a $5.5 million rebate plan for municipalities and farms. Demand quickly outstripped available incentive programs for such sectors; the program is expected to fund 160 projects in total.

The Solar Energy Society of Alberta estimates that a solar PV system can be installed to accommodate an average household’s electricity demand — estimated at 7,200 kWh per year — for about $18,000. The initial cost can be a deterrent for residential and business owners.

That’s where the new rebate program will come in, significantly reducing the payback period (cutting the current 15- to 20-year payback timeframe by about 30 percent).

Kelly noted that such figures aren’t as generous as some other jurisdictions. But that’s a good thing, he suggested, as you don’t want to “create a gold rush mentality for solar.”

It might sound a bit counterintuitive. But it’s something that Rob Harlan, executive director of the Solar Energy Society of Alberta, explains is necessary to prevent problems around quality and safety due to the industry expanding too quickly.

“Traditional electrical training doesn’t include a lot about solar technology yet,” he said. “Electricians need to have a little bit of additional training to do these systems well. If it becomes too lucrative too soon, you get a lot of sales and marketing people dominating the industry.”

The rebate program is just a small part of the province’s push to green its energy system, with the overall target of a complete phase-out of coal-fired power and 30 percent renewable generation by 2030.

That doesn’t guarantee that proponents will follow through with the project, but it certainly represents a solid measure of interest.

Hastings-Simon says the new rebate program will also benefit people who don’t choose to install solar, as it will reduce costly electricity generation during peak times and the need to build new transmission infrastructure.

More Can Be Done to Encourage Microgeneration, Advocates Say

In late December, the province amended the legislation on microgeneration, or small-scale generation for personal consumption, with excess power sold back to the grid.

The tweaks included increasing the size limit (from one MW to five MW) and allowing for solar systems to connect to adjacent sites (as opposed to having to be literally on the roof of the consumer). But some advocates suggest the microgeneration regulation be further amended to allow for the potential growth of residential solar.

“Right now, the microgeneration law limits system size to your past year’s consumption,” Harlan said. “We’d like to see that lifted. It’s important to limit system size by things like fuses, conductors and transformers: basic safety and technological issues. But why not allow somebody who has a commercial building with a large roof to sell it with solar modules and help clean Alberta’s grid?”

Pembina’s Hastings-Simon agrees, noting that it would be hugely helpful to make it possible to size systems larger than the load they’re immediately connected to.

That would mean that if someone wanted to build a solar project with their neighbors, they could build it in a central nearby location even if it’s not directly connected to each of their houses (but is instead connected via the distribution grid). In addition, “virtual net metering” would allow someone to have “virtual ownership of a solar panel” with credit applied to your electricity bill.

“Those are some of the things that help community solar take off,” she said.

The next step for the rebate program is a Request for Proposal to identify a third-party contractor to administer the program.

Minister Phillips emphasized in the press conference that projects will have to meet program requirements, with the details established by the agency this spring; she said it’s on the consumer to figure out if their building is a good fit for solar, solicit multiple bids from companies and do due diligence “to protect themselves as consumers.”

She added that people will be able to register for the program by mid-April, and that rebates will be retroactive to that time.

“It was a little short on details but it sounds, from what they spoke about and what was in the press release, that it’s going to be fairly comprehensive,” Kelly concluded.

This article was originally published by DesmogCanada and was republished with permission.