Pennsylvania’s shale gas companies will pay an estimated $175 million in impact fees for 2016, a new record low for the 5-year-old program that reflects the low prices and lack of new drilling that defined the industry last year.

The projection released Monday by the state Independent Fiscal Office anticipates that the impact fee will bring in $13 million less than it did last year, continuing the decline trend for the third straight year. Few new wells and older wells that fall below production thresholds are to blame for the drop, the office said.

Companies pay the highest fees for wells in the first year they are drilled and the 503 new wells drilled in 2016 were not enough to offset declining fees paid by older wells as they age, the office said.

Also, 1,900 wells that are plugged or produced less than 90,000 cubic feet per day are exempt from the fee.

Impact fees are collected on the state’s Marcellus and Utica shale wells each April, and 8,200 wells will be subject to the fee for 2016, the fiscal office said. The revenue is distributed by July to communities that host the wells, as well as to statewide environmental, infrastructure, emergency management and housing programs.

Host counties and municipalities and a state housing fund will likely have a smaller pot of impact fee revenue to share this year.

Some distributions to state agencies are fixed by law, but distributions to a fund for county and state environmental and infrastructure initiatives is also expected to fall — to $63 million from $68 million the previous year.

Pennsylvania’s impact fees have cumulatively raised $1 billion across five rounds of payments since the law was passed in 2012. If the fiscal office projections are correct, this year’s payments will bring the total to $1.2 billion.

Despite weak prices at regional trading hubs and limited new drilling, annual production from Pennsylvania shale gas wells continued to climb, by nearly 11 percent, to 5.1 trillion cubic feet in 2016, according to 11 months of state production reports and fiscal office estimates for December.

Unlike more conventional severance taxes levied by other major gas-producing states, the impact fee is not directly tied to the price or volume of gas the wells produced. 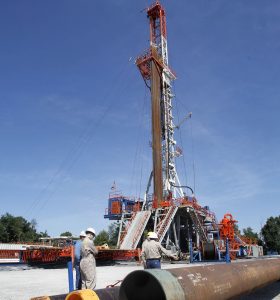